Design thinking process behind a digital solution for the global expansion of a clothing swap initiative. 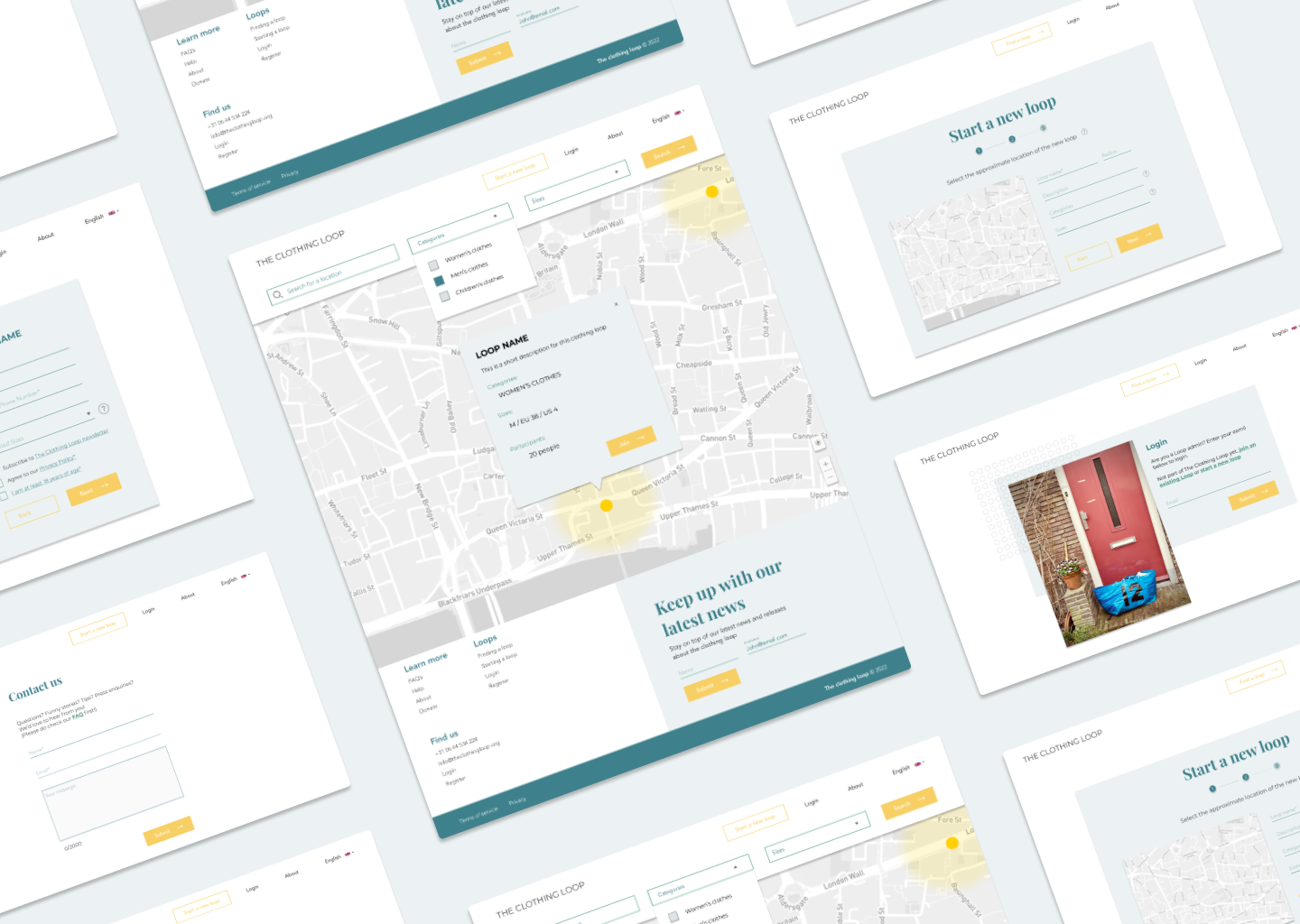 The Clothing Loop is a clothing swap system that lets you share pre-loved clothes by connecting people in local communities that share a bag of clothes.
The Clothing Loop won the What Design Can Do competition set up by Impact Hub.
The initiative started in The Netherlands in early 2020 as a local alternative for clothing swap events during lockdown.

The initiative tackles the growing problem of overconsumption. It aims to change consumers habits and reduce waste, providing a fun and sustainable alternative to fast fashion. Currently, there are 300 actively circulating bags and over 12,000 users.

As part of my role as a UI designer for The Clothing Loop, I lead the design process and production of the web application.
Alongside my contribution, I teamed up with a professional UX/UI designer, to enrich the user-onboarding experience and automate the initiative's global expansion.
I conducted user testing, outlined user journeys and designed features.

The initial phase of the platform development included a very basic UI with the following functionalities:

The initial part involved outlining the key challenges, which I summarized as follows:

I began structuring the design process by leading a user-centered research with the aim to pin-point strength and weaknesses of the essential features. As no data was available to identify problems, I conducted an early stage user interview. This helped me to gather qualitative data on features that were already built. I was able to interview a variety of different user types - some familiar with the initiative and others not. Early stage user interviews, were a fundamental step to test features and quickly reiterate over them before globally launch the platform. Some of the most significant insights were:

After having reviewed all qualitative data gathered during users interviews, I started to prioritize the features to implement. And then moving onto the first wireframes iteration.

The first feature to be tackled was the 'new loop' sign up form, which breaks down into two forms: 1. new user signup form, 2. form to select the area in which a new bar circulates in.
For this feature reiteration, was introduced a progress bar to track the signup process, an interactive map in which the user can select the approximate area in which the bag of clothes circulates and implemented a cleaner UI.

Followed by search and filter functionalities of the map visualization. Below, some of the wireframes of the above features that were produced as part of the redesigning process. For this feature reiteration, was introduced the option to search by location which on submit sets the map's viewport to the searched location. Also, the filters by categories and sizes was implemented by refining size ranges and programmatically giving filter parameters based on user selection.
The UI for these functionalities was also implemented and included within a unique search bar, just above the map.

Next, was tackled the issue of consistently display the various active bags of clothes on the map. Markers were replaced by blurred circles with mutable radius values based on the user input (when initiating a new entry). The circles represent the area in which a bag of clothes circulates; the idea was to display an approximate location and also let the user decide its extension.